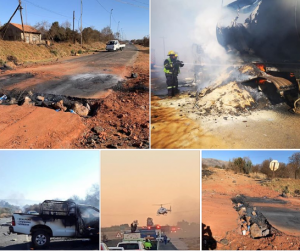 For months now, the Hekpoort/Magaliesburg area has been troubled by the actions of riotous people who block roads, destroy infrastructure, burn down pasture for animals and even torch private vehicles and trucks. All because they were promised land and houses, but it did not happen.

The destruction in Hekpoort, the valleyed agricultural community that borders on the well-known Cradle of Humankind heritage area, is a direct consequence of the opportunist pre-election promises that the ANC made to residents but did not keep.

Protesters are preventing people from travelling to their farms and businesses and motorists often have to take detours just to reach their destinations.

The businesses that offer jobs to the local residents and that make a contribution to the economy are suffering great losses and the blame for this can only be placed at the door of the local and national ANC government.

The Mogale City Local Municipality made promises about housing to the residents of the area before the 2016 municipal elections, but these promises were not kept.

The pre-election promises were made after a specific piece of land, which was earmarked for housing, was sold to a private person for R8 million and was then sold back to the city council for R16 million on the very same day.

Recently, protesters intensified their protest actions and the police had to intervene.

The FF Plus is currently engaging with role players on various levels of government and with the help of the party’s councillors in Mogale City, Members of the Gauteng Provincial Legislature who serve on the Local Government and Community Safety Committee as well as Mr Jaco Mulder, FF Plus Member of Parliament, the party will step in and help solve the problem in the interest of all the residents.

The FF Plus has called on the residents of Hekpoort to stand together and to take control of the future and safety of this otherwise peaceful community.