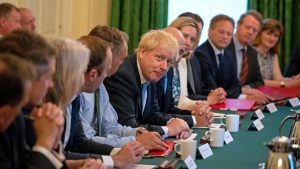 The New UK Prime Minister Boris Johnson, who replaced Theresa May who resigned after being unable (or unwilling) to implement BRexit after 3 years, conducted a cabinet bloodbath on his first day that saw Theresa May’s ministers replaced with loyal, true BRexit believers, aka BRexiteers. It has all the hallmarks of a government readying itself for a general election. In what was less a ‘reshuffle’ and more a complete overhaul of a Tory government weighed down by the BRexit debacle, Wednesday saw 17 of 30 ministers either sacked or resign as Johnson stamped his authority on day one. The government is now no longer trying to bridge the divide between remainers and leavers, but committing to BRexit 100% even if it meant no deal.

Just one day into his premiership and it’s already clear that Britain’s new Prime Minister Boris Johnson means business. The question is: what kind? There’s wielding the knife and there’s wielding the knife, and Johnson, with his merciless cull of Theresa May’s deadwood from his new cabinet, has moved with the alacrity of the leader of a coup rather than a democracy to assemble around him a cabinet of ideologues, Russophobes, and politicians from the far reaches of the swivel-eyed margins.

The new Ministers taking up some of the most powerful positions in Johnson’s Conservative cabinet are ostensibly not only hardline Conservatives, but also Brexiteers who are comfortable with the thought of Parliament being suspended to push through the people’s democratic choice in the 2016 referendum, even if it means a no-deal Brexit.

After officially being installed as Britain’s new Prime Minister, Boris Johnson made his first address to lawmakers in the House of Commons to outline his new government’s approach to solving the Brexit debacle.

Wednesday saw 17 of the 30 ministers who served in Theresa May’s cabinet either sacked or resign, as Johnson exerted his authority on day one.

Addressing MPs, Johnson promised to take Britain out of the EU – deal or no-deal – by the deadline day of October 31. In what ostensibly was a veiled threat to the EU and staunch remainers, he insisted the contentious Irish backstop had to be abolished as a time limit was “not enough.”

The new UK prime minister, a world away from his predecessor’s head teacher-like delivery, revealed that his government would not be nominating a new EU commissioner, to add to his optimism that he can achieve Brexit success.

On domestic policy, Johnson announced that he will commission a report on the UK moving to an Australian-style points-based system for immigration.

Labour leader Jeremy Corbyn responding to Johnson’s statement with the typical left wing racecard, accused him of throwing “together a hard-right cabinet.” Corbyn asked whether the PM could assure MPs that he had no plans to bring back the death penalty, given that the new home secretary, Priti Patel, has previously called for it’s reintroduction. Johnson, notably, gave no answer.

The opposition leader insisted that the “wealthy elite” who fund the Tory Party will not be the ones who lose out from a no-deal Brexit, but ordinary workers.

And yet there are many workers who will support this government. Why? Simply because of the sense of purpose, energy and ideological conviction it has already infused into the UK political arena. It is a political arena that had become as stale as month-old bread over a Brexit crisis rendered worse by a May government and Corbyn-led opposition in making a virtue of triangulation.

Looking west to Washington, Trump knows that in Boris Johnson he has himself a reliable ally in the war against political correctness, ID politics, and multinational trading and political blocs. He knows also that the no-deal Brexit that Johnson and his team are determined to achieve will make the UK putty in the hands of his administration, allowing it to drive the kind of free market bilateral trade agreement he relishes.

Just as a society gets the criminals it deserves so it gets the governments it deserves, with in many cases it being impossible to tell the difference. Bungling Boris, the feckless British foreign secretary, has suddenly metamorphosed in Dynamic Boris, Britain’s new prime minister, standing on the shoulders of his political hero Winston Churchill, determined to Make Britain Great Again.

British MPs break for summer recess on Thursday and return to work on Sept 3. However, the new prime minister may find his summer vacation plans canceled as Brexit negotiations with Brussels restart.

PM Boris Johnson has hired the services of Dominic Cummings, the mastermind behind Vote Leave’s victory in the 2016 EU referendum, as his chief of staff; and the new Prime Minister appears to have assembled a team intent on delivering BRexit without a deal if need be.

A Vote Leave campaigner who was forced to resign from May’s cabinet as international trade secretary after conducting “off-the-books” meetings with the Israeli government while “on holiday” in the Golan Heights.

During an appearance on BBC Question Time in 2010, the conservative Patel advocated the return of the death penalty for murderers and rapists, insisting that “I would support the reintroduction of capital punishment to serve as a deterrent.”

Before entering parliament, she worked as a lobbyist for a tobacco firm that allegedly paid its workers £15 a month, according to the Observer.

During his previous 18 months in office, Williamson, 43, was loved by the media for the blunt and rather childish statements he made on a regular basis – telling Russia to “go away” and “shut up.” Let’s hope he can improve his vocabulary while education minister.

He also proposed to put guns on tractors to save money, and threatened to send an aircraft carrier into Chinese waters, which led to the cancellation of a high-profile state visit. Williamson was sacked as defense secretary just under three months ago for allegedly leaking state secrets in the Huawei Chinese high-tech scandal.

A hardline BRexiteer who floated the idea of proroguing (suspending) parliament to guarantee the UK’s exit from the EU during his ultimately failed Tory leadership campaign.

During his time as Brexit secretary, Raab was mercilessly mocked after revealing that he “hadn’t quite understood the full extent” to which Britain was reliant on the Dover-Calais crossing for trade.

A true conservative, in 2011, Raab insisted that “feminists are now amongst the most obnoxious bigots,” adding that it was time for men to start “burning their briefs.”

In 2017, he claimed that most food bank users were not “languishing in poverty” but were instead having “cash flow” problems, and has branded British workers “the worst idlers in the world.”

Jacob Rees-Mogg – Leader of the House

The prominent anti-EU Tory MP, Christian and Conservative, who heads the powerful Brexiteer European Research Group (ERG), was previously tipped to be a Conservative leader of the future and was a constant thorn in former PM May’s side. He has built up quite a large following among patriots.

Some of the posh Etonian’s ‘greatest hits’ of controversies include suggesting all council workers wear bowler hats, unwittingly speaking to a group that favors voluntary repatriation of black immigrants, and voting against gay marriage, and abortion even in cases of rape and incest.